Hello all,
Yes its been a while for all of us here at second city but summer is drawing to a end and modeling/painting/playing will hopefully be happening more often, which will mean more post here! Anyhow, I still have not finished my landspeeder storm nor the scouts that accompanied it, but I finally managed to make it to the oak park store to get some primer and get going on em. On a side note, actually the reason I went to Oak Park was because I had gotten a no subject email by someone named whatsnewtoday, normally I would have just deleted it as spam, but it was early so I clicked on it and I am glad I did. It turns out it was an email for GW UK saying that I had won a free Battleforce just for adding Oak Park as 'My Store' on the GW site. Well I gotta say I was surprised and a little bit skeptical too! So I headed on in and showed em the email and sure enough it was legit. I really have no need for any of the models in any of the Battleforce boxes so after chatting it up with (Joe) and looking at the available Battleforce boxes some more I decided to just ask if I could wait for the release of the Space Wolves one and come claim my prize then, he had to make a call to some (probably inquisitioner or commissar) unknown person and after a bit of a wait he said it was a go! Sweet, all I really want is the drop pod but I am sure that some of the SW spures will be cool too.
Lets see, well as the title of this post says, this is my first Death Guard modeling post. I've been really excited about getting together a Nurgle Army for a while now and ended up trading some stuff for the 7 man box. I really also decided that I was not so into chaos that I was going to spend an enormous amount of time on em either, so after some googling I managed to come across someones post on Bolter and Chainsword that provided some super quick and easy painting tips for Death Guard. I really like the first go at em. I was able to do all 7 in a couple hours time. granted there will be some additional highlighting and such but for the most part the are almost tabletop ready so here are a couple pictures. Flash does not do them justice either.... (Thanks Matt) for the SW Rhinos.... and sorry they are being so horrendously mutated by Nurgle! here is where things get a bit sketchy... Yes I am making Death Guard Berzerkers... I want to be able to have the best of all chaos gods yet maintain a consistent looking army, will probably get shit for these but whatever I like em... Well will post more and I get more done.
-Brose
Posted by Pedro Kantor at 7:40 PM 4 comments: Links to this post

With a Little Help from Our Friends... 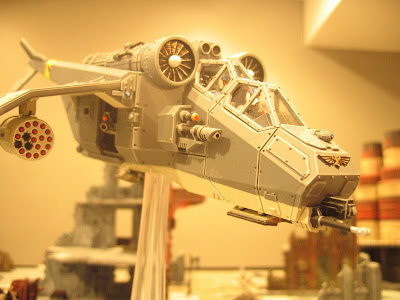 The summer has been pretty slow here at 2nd City Warzone, but I suspect as the temperatures cool, more of us will be indoors, huddled over our painting tables.

In the meantime, I don't want our loyal followers to be without some content. Luckily, our friend Art Olsen has provided us with some pics of the stuff he's been working on.

First up is Art's Valkyrie. This won the Valkyrie painting competition at the Games Workshop store in Oak Park, Illinois back when this model was released. I think the empty slots on the missile launcher are a real nice touch. 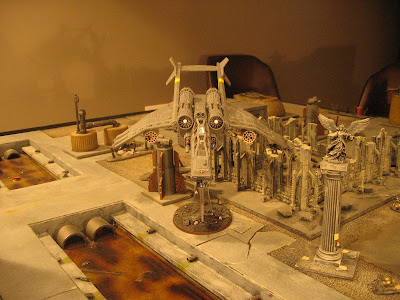 Art has also converted his own Sergent Harker model to match his Steel Legion IG army. I really like this model - Simple but effective. 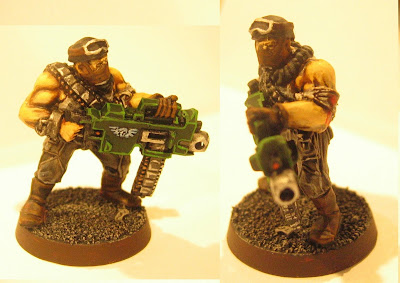 Here are a couple pictures that of his army that I previously featured at Citizen Nick Hobby Center. Enjoy. 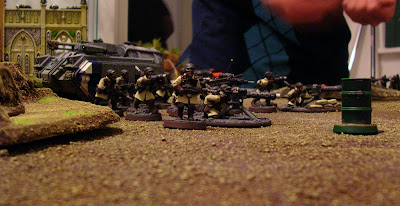 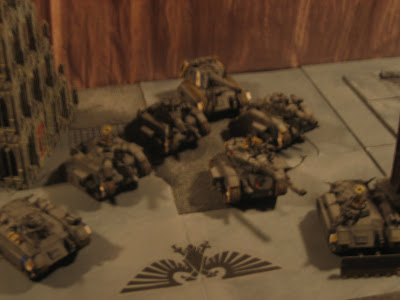 Posted by Scott at 1:35 PM 2 comments: Links to this post

I couldn't let today pass without posting something.

So in honor of 9-9-9 day and my favorite god of chaos, I offer these Tzeentch flamers. They're not quite done. I still have to touch up some of the sloppy areas especially around the mouths.

I started these along time ago during a time when I was trying to prime with gesso. I'm not really happy with the texture or finish. I think the gesso made the final coats a lot grainier than I wanted. I know there are a lot of people who swear by it, but I think it's kinda crappy. Particularly with metal models, the gesso doesn't adhere as well as spray paint.

Anyway, I don't think I'll every be happy with these, I just hope that the next set will be better with a smoother finish. 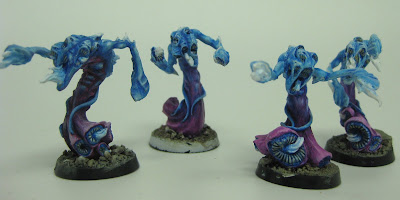 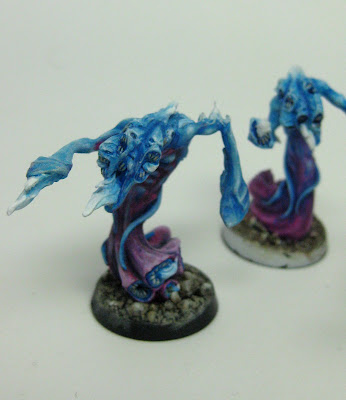 The change of Tzeentch be with you all on this special day!
Posted by Scott at 9:09 AM 2 comments: Links to this post