I just dropped a post 2 hours ago but I wanted to document the updated bases and weathering I put into Tactical Squad Midas over the last 2 days. Though they died to a man, they are the only Squad I can think of in the tournament over the weekend that put up a real fight and had some heroic moments.  The plasma gunner even broke and ran, rallied, and came back to try and contest the objective he was driven off of. He then died in a blaze of glory. This is Tactical Squad Midas:

Posted by xNickBaranx at 2:29 PM 3 comments: Links to this post


Thanks again for reading. I just did some weathering and basing work on Tactical Squad Midas and need to get back to work on the more dynamic/elite portions of the army. More later this week.

All of the frantic painting of Warden Biker's came to a grinding halt today. I was making great progress but I realized I wasn't going to have them done for the tournament on Sunday so I needed to look at what I needed to get my army list done and in tonight, and I'm going with a force that includes a horde of Tactical Squads. I needed to finish this one Flamer marine in order to complete the Tactical Squads I've selected. This guy is a new development in my army building - his Flamer is magnetized in place. Nothing groundbreaking for the rest of the hobby community, but its something new for me.

He's going to need his base decorated, tactical markings, and weathering once the new Codex comes out but in the meantime he looks good enough to put on the battlefield at the tournament. 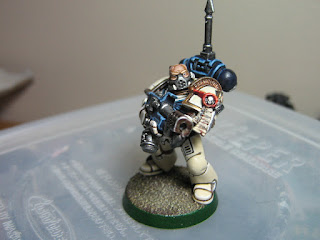 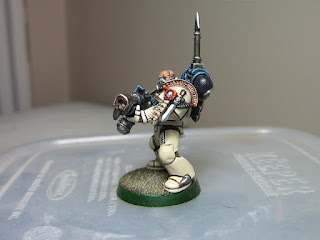 -Nick
Posted by xNickBaranx at 8:59 PM No comments: Links to this post

Last night I posted a photo of the bike I'm working on. This morning while I was working on the bike fairing I took a hobby detour to pull out one of the squads I intend to use at a tournament on Sunday and give them a quick update. These changes are subtle but add just another level of detail to my figures. The first photo is the squad before I applied Forgeworld Medium Earth, some spotty use of Devlan Mud, and some additional basing material like Broom Bristle, Clump Foliage, Static Grass, and Grass Tufts

Thanks for checking them out. More later today.
-Nick
Posted by xNickBaranx at 11:34 AM 1 comment: Links to this post

This is just a quick update to show a slight variation in my process. Currently I'm cranking away on my second Wardens Bike. I had a partially completed base (painted a year or so ago) that I elected to apply Static Grass, Grass Tufts, Broom Bristle, and Clump Foliage to before I attached the bike. I test positioned the bike all along the process to make sure nothing looked out of place or would impede it's path.

The bike itself is coming along. I still need to paint the fairing/bolters (not pictured), a skull on the opposing side, and any iconography. The goal is to have this bike and one other ready for the tournament this coming Sunday. 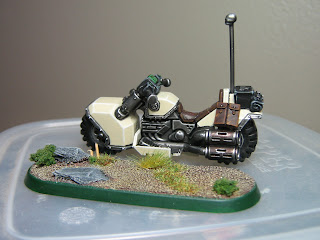 That's it for today. Hopefully I'll have this complete or near completion tomorrow.
-Nick
Posted by xNickBaranx at 10:11 PM No comments: Links to this post

Today is my girlfriend Lisa's birthday. We are partners, we've lived together for a couple years, and we have dogs together. This morning I was reposting Lisa's Birthday Wish on Facebook and ran across an image of a pendant that Lisa would just love, if it wasn't for one thing - she doesn't really wear jewelry. This is the pendant here:

Anyway, not only would she love this art, it just so happens that the shape of this pit bull's face is just like our girl Harlow:
With a bit of time available to try and do something a little extra special for Lisa I decided to use my hobby skills to modify the image slightly to Harlow's coloring, and then hand paint it. I used Photoshop to turn the pendant photo into a sketch. I had to redraw the right side with pencil, add the flow of her 1/4 black face, and then remove the chain and shadows:
Two and a half hours of painting using my Citadel Color Paints and the original image as a guide I had a painting of Harlow in Mexican Sugar Skull style to give to Lisa for her birthday. I'd like to give her something else though. I know none of you out there know Lisa or Harlow, but Harlow is a special little girl. At 12 weeks old, as just a tiny little puppy, her previous owner kicked her and broke her jaw. She has a spirally pig tail as well because the previous owner broke or deformed it trying to dock it. She was rescued and taken away from her original owner by the people at Chicagoland Bully Breed Rescue and after she got the proper veterinary care and jaw surgery she needed she was put into foster care with one of their wonderful organizers. Once she was nursed back to health and was ready to be put in a forever home, she joined our family. For Lisa's birthday she is trying to give back to the people who do so much for pit bulls in need like Harlow. Veterinary care and surgeries are not cheap and the organizers commit most of their free time to rescuing pit bulls from awful situations, fostering and finding foster homes for those they rescue, and advocating for this very misunderstood breed of wonderful loving animals. So if you can spare $10 to make Lisa's Birthday Wish come true and help out these dogs it would be fantastic and we'd all be extremely appreciative. As I said, I know none of you know Lisa or Harlow, but that would make it such a surprise. She's trying to raise $500. Here's the link: Lisa's Birthday Wish. 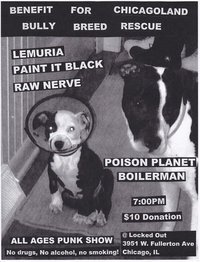 That little puppy on that punk flyer with the "cone of shame" and the wrap around her jaw is Harlow at 3 months old. Please help out if you can. More Angels of Absolution models and grim dark rambling next time!

-Nick
Posted by xNickBaranx at 1:41 PM No comments: Links to this post

Wardens (Ravenwing) Bike Continued and Preparing for the Next AWC Tournament

For those who have just discovered this blog, I am not really a tournament player. I've been working on my Angels of Absolution for 18 years now and my success at tournaments dwindles with each passing year as the culture of competitive play escalates and my painting speed stagnates.

There was some discussion on various forums about how bikes have improved in 6th Edition and it inspired me to drag out a partially completed squad of bikes and start tinkering with them. What makes bikes better in 6th? Well, they can move 12" in the Movement Phase, they have Jink, Relentless, Hammer of Wrath, Armoured Steed (T5), and can Turbo Boost. Yeah, they had all of these things effectively in 5th except for Jink and Hammer of Wrath, but the Armoured Steed rule gives them a flat Toughness 5 making them more resilient against S8 and S9 attacks. Additionally, in the DA 6th Edition FAQ, Apothecaries can give the entire squad Feel No Pain. Of course, in order to have an Apothecary I need to have a Master of the Ravenwing so that I can give a Ravenwing Squad command upgrades. But thinking about it, taking a full Ravenwing Squad of 6 with an Apothecary and then adding a Chaplain on Bike to the Squad could make them a serious threat to someone's flank. Add in the Ravenwing Attack Bike, Ravenwing Landspeeder, and the Master of the Ravenwing. Maybe I might be a threat to someone? Nah, I'll probably end up fighting all Tyranid opponents or something. Regardless, it seems like a cool unit so I'm going to strive to eventually build it. But for now, I just want 3 Bikes and an Attack Bike for the upcoming tournament.

Here's some pics of my first completed bike. This model was a hassle because it was assembled and started at a time before I started painting models piecemeal. One of the biggest issues was that I had broken off the arms and when I went to glue them back on they didn't line up the same and wouldn't attach properly because of the shoulder pad placement. I had to pry the arms out of their shoulder pads with increasingly larger tools because my first attempts to break up the old glue with an hobby knife resulted in me breaking the tip 3 times. Luckily I hadn't replaced the blade after each break or I would have been pissed. Even though its a plastic model it has several pins holding it together to make sure things did what I wanted them to. The arms are both pinned on, the bike is pinned to the base, and even the backpack had to be pinned on because the paint and old glue were interfering with gluing and the old nub on the back of the torso had broken off in his original backpack when I tore it off. I had some really frustrating moments with this model but he's considered "Done" - for now at least. He'll eventually get more squad markings and some weathering when his squad starts to come together more.
Thanks for reading.
-Nick
Posted by xNickBaranx at 5:49 PM 2 comments: Links to this post