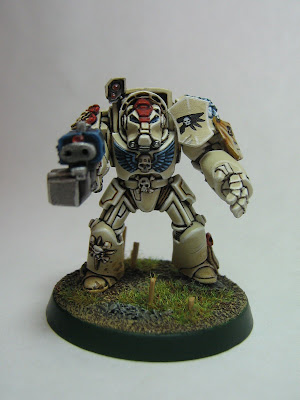 After pulling this model out of the "in progress" case and working on him on and off for 2 weeks he's finally done! 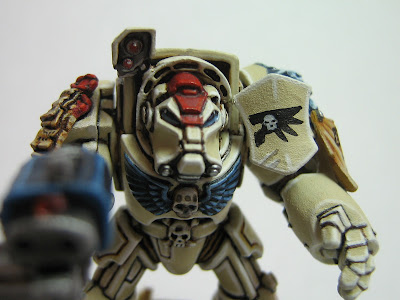 This was the remaining arm that needed to be completed. Nothing too fancy - some script and some painted scratches. 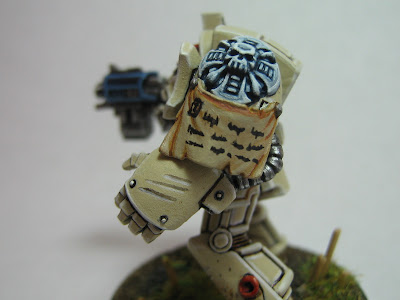 This photo is to show off some of the weathering on the feet and some more painted scratches. Scratches were done with a couple of swipes of Badab Black Wash or Devlan Mud Wash on top of each other and then a Skull White highlight below it. The weathering was some stippled Snakebite Leather and Bubonic Brown, followed by some spot washing with Devlan Mud. The sticks coming out of the base are made from broom bristle. 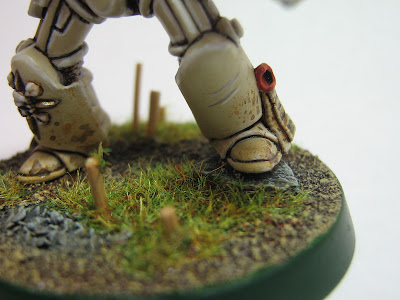 This a WIP shot from the last update just to show the freehand Veteran symbol again. 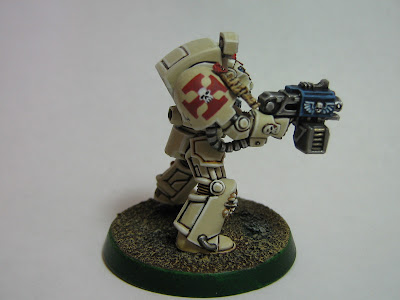 These are some of the projects on my desk right now. I don't realistically believe that I'll cruise through 2 more Terminators. I'll be lucky if I finish one more. I have a hobby article in mind though so that's where Terminators in multiple stages come in. I would like to finish that Assault Marine though. I started the squad around 1995 and am at 7 fully painted models. If I could complete the squad this year that would be stellar - even if they don't fare very will these days in game play. 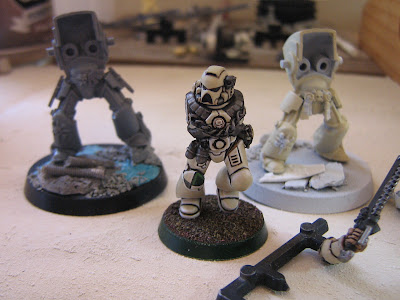 Finally, completion of this model now adds 2 points to my painting tally for the year - exceeding the 18 points I earned in total last year! Wooohooo. It's all surplus from here on out! Also when I was updating my model purchases for the year I forgot to include a box of 5 Grey Knights.
Posted by xNickBaranx at 12:12 PM

Looks awesome! Hurry up and paint the another 4!

Also, can we see some Marienburgers?

I would love to have the patience to knock out 4 more this year. I don't think I have it in me. We'll see.

I'll get some Marienburgers out on the table soon my friend. This Assault Marine should go fairly quick.

Terrain projects aplenty are coming up too!


Also, I'm very impressed that the steam tank is the only model you picked up this year...

I half-expected you to get the Dark Eldar bug.

And some misc bitz. But I've painted as many models as I've bought so far - though none of the models I have bought have been painted yet (the Caestus is started at least).

Terrain projects are to start soon. I have a major project to begin for Adepticon to start ASAP. Most likely right after my birthday.

And I hate Dark Eldar. Ewwwww. (Even if the models are beautiful, they're still Elves.)

Really cool stuff, you can also get some pieces from a guy who works in Buy cialis he collect this pieces and also sell them for hobby.